What is a Task queue and Celery?

Task queue is a mechanism to distribute or dispatch "tasks" or "jobs" across "workers" or "machines" for executing them asynchronously.

Common use cases of task queue:

Applications, also called as "Producers", "Publishers" register logical blocks of code as "tasks".
Workers, also called "Consumers" consume these "task" and optionally store any results to a "message backend".
The broker (task queue) receives tasks encapsulated as messages from "producers" and routes them to "consumers".

But managing messages is not as simple as storing them in a data sotre as aqueue.
Suppose that a number of messages sent and dispatched by large number of producers and workers.
We have to consider below.

Celery is a one of most famous task queue open source software. A Celery system can consist of multiple workers and brokers, giving way to high availability and horizontal scaling.
The features of celery is

Celery is written in Python, but the protocol can be implemneted in any languages. There's gocelery for Go and like gocelery, here's celery.node. 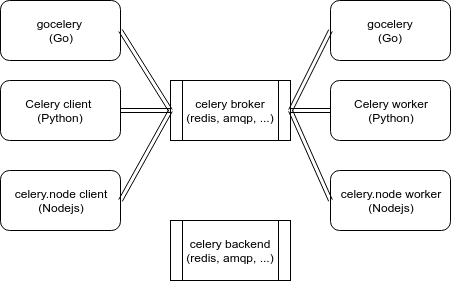 We usually make programs using different languages because of the specific features of each language and sometimes the programs should be communicated with each others by task-queueing, such as python web application with go worker or nodejs worker for better performance.

We can make the programs distribute the tasks to processes written in different languages super easily by using celery, gocelery, and celery.node.

Also, you can use celery.node as pure nodejs task queue.