An intuitive outliner for personal knowledge and task management.

Update 2021: I recommend moving to Logseq, because it has a better performance with many notes, and the concept of having a network instead of a tree is easier to organize.

This program is free and open source. Therefore, you can trust it. Your data stays on your computer.

Half a year of research flowed into the development. I developed this application in my bachelor thesis in the year 2015, graded A+ and written at the University of Oldenburg. Have a look at it: German PDF file.

The author has used many time management programs over the last four years. When the number of tasks grew, a neat system like Getting Things Done became essential. Therefore the development of TreeNote was influenced by powerful tools like Omnifocus (Mac only) and Org mode (too complex). However, TreeNote is as intuitive to use as the light tools Wunderlist and Evernote.

When starting TreeNote for the first time, you will see a detailed manual which guides you through the features. The user interface and the manual are supplied in German and English.

You find a complete list of features in the wiki.

Me and couple of friends are using TreeNote on a daily basis since years. It is a central and valuable piece for our self-management. TreeNote is well tested and bug-free, apart from this one:

When you have searched or filtered the tree you must not edit the tree's structure. If you do, TreeNote may crash and your tree may become corrupted (you cannot open it anymore). Editing of a single entry (text, color, date) is okay.

It is a good thing to enable daily backups in the settings.

I would like to do a complete rewrite of TreeNote in Scala. It shall be more robust, faster and collaboratively editable (while of course running offline and privacy-friendly). Therefore I won't develop TreeNote any further.

Alternatives to TreeNote are the collaborative online outliners Dynalist, Workflowy and Moo.do. They have desktop apps, too. 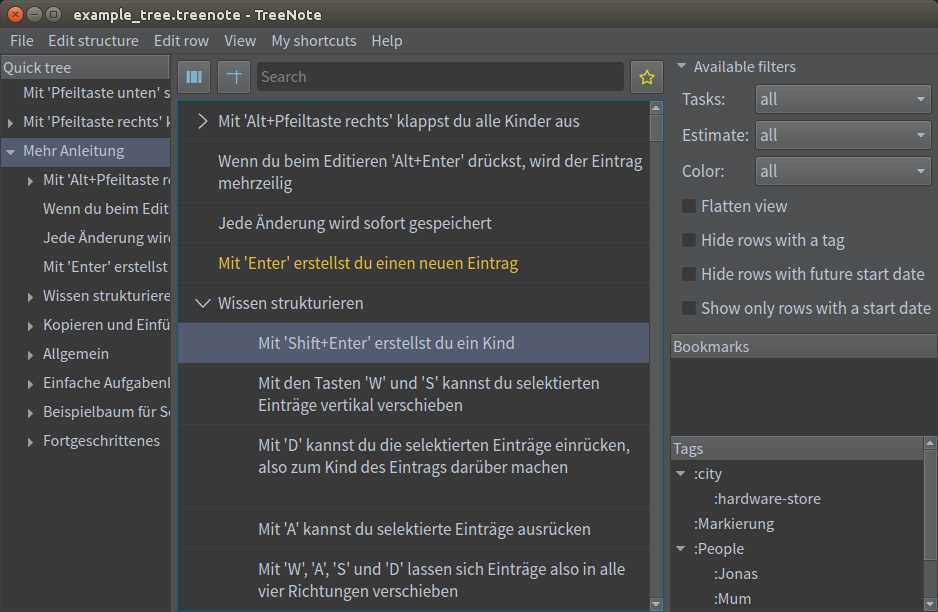 Roadmap (not to be done by me)

Apart from the listed huge changes new versions often contain small improvements and bugfixes, look in the detailed Git log if you are interested.

TreeNote is written in the most beautiful programming language available: Python. It pays off to learn it. So start with one of these great books.

TreeNote uses the GUI library PyQt, which is a Python wrapper for the popular Qt library. Qt has a really good documentation. If you want to know what a particular class is able to to, just google it, e.g. ‘qtreeview 5’ (the 5 is for Qt version 5) and it will give you http://doc.qt.io/qt-5/qtreeview.html.

If you don’t know how to do something:

The QTreeView interacts with the underlying data structure through the class TreeModel, a subclass of the QAbstractItemModel. The overwritten methods can be divided into two categories:

Filtering is done with the QSortFilterProxyModel very easily. It is inserted between the regular model and the view and passes through only the desired items, for example the ones which match to a search string.

Set up the deployment environment

This app was created by me and a fellow student at university. It is working nice, but I don't like its progamming language (Java is so cumbersome compared to Python). Therefore I will not develop it any further. If you want to pick it up, I can explain you some code, but in general it should be written cleanly.

Download the .apk file. If you have a Google Play Developer Account, feel free to publish the app.

The code and images are in this repo.