After developing and using this Clojure wrapper for AWS CDK for the past six months, we've decided to use TypeScript and AWS' library directly. We are discontinuing maintenance moving forward. If a member of the community would like to volunteer for future maintenance, please file an issue or reach out directly to discuss a possible transfer.

This library is a Clojure wrapper for AWS Cloud Development Kit (AWS CDK).

This is an alpha release. We use this library internally and consider it stable. Nonetheless, we may still make minor changes to the API.

The AWS Cloud Development Kit (AWS CDK) is an open-source software development framework to define cloud infrastructure in code and provision it through AWS CloudFormation.

It offers a high-level object-oriented abstraction to define AWS resources imperatively using the power of modern programming languages. Using the CDK's library of infrastructure constructs, you can easily encapsulate AWS best practices in your infrastructure definition and share it without worrying about boilerplate logic.

CDK is built on Amazon's jsii project, which allows TypeScript projects to be shared across Python, JavaScript, Java and C# via code generation.

cdk-clj taps into this ecosystem directly by consuming the jsii protocol and bringing infrastructure to the REPL. REPL-driven infrastructure turns a frustrating practice with long feedback cycles into an enjoyable experience with immediate feedback and makes it possible for Clojure code to be deployed to AWS with minimal configuration.

For a general introduction, watch the Clojure/Conj talk: 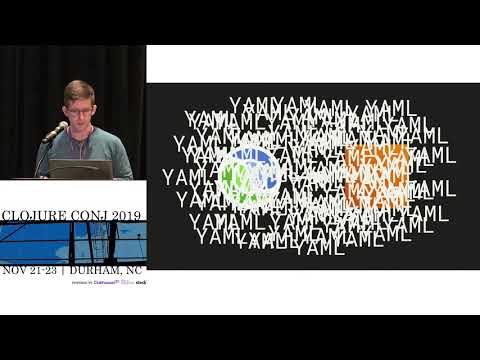 where the argument to -i is the path to the file in which the cdk-clj app is defined.

jsii is a protocol that allows TypeScript classes and objects to be consumed via an RPC protocol. This protocol exposes the ability to:

CDK exposes its functionality via this API to allow non-JavaScript programming languages to benefit from the functionality it provides. cdk-clj maps these operations into Clojure friendly equivalents. The CDK library relies heavily on object oriented principles and cdk-clj does not shy away from those concepts. Instead, it embraces them and maps them into a Clojure-friendly interface. In doing so, it makes the CDK documentation directly mappable to Clojure.

There are two types introduced by this library: CDKClass and CDKObject. Together, they expose all of the functionality of the jsii protocol by implementing the clojure.lang.ILookup and clojure.lang.IFn interfaces:

Instantiate an object from a class

Get property of an object

Set property of an object

Call a method on an object

Get static property of a class

Set static property of an object

This error is non-specific and is raised on any failure to launch the runtime process, not just the missing executable named; that the causative exception is not chained makes this harder to debug.

One possible cause is not having the Node.js executable (i.e., node) on the PATH given to the JVM. If you're using a Node version or virtual environment manager, add the appropriate directory to the JVM environment.

Contributors are welcome to submit issues, bug reports, and feature requests. Presently, we do not accept pull requests.

cdk-clj is distributed under the Apache License, Version 2.0.