Update - Sept 2019: This repo is deprecated. However, Oleg Glozman is maintaining an active fork of the repo:

Staffjoy is shutting down, so we are open-sourcing our code. This the second version of our product, a ground-up rewrite intended for small businesses, like restaurants. This product was very simple and did not provide features like allowing workers to log in, clock-in, etc. If you want those features, please use Staffjoy Suite You can learn about the design journey from V1 to V2 in this blog post.

We started building V2 in August 2016, became feature complete in November 2016, and launched to the press in January 2017.

This is a monorepo, so all of the code for all of the services are in this repo. The core technologies are the Bazel build system, Kubernetes (including its DNS for internal service discovery), Redux, Go, Protocol Buffers, gRPC, and Yarn. In staging and production, we used Google Container Engine and their managed databases.

The authors of the original code were @philipithomas, @samdturner, @andhess, and some contractors. @kootommy designed the application and most of the marketing pages, and worked closely with engineering on implementation. This is a fork of the internal repository. For security purposes, the Git history has been squashed.

Read about the V2 architecture on our blog 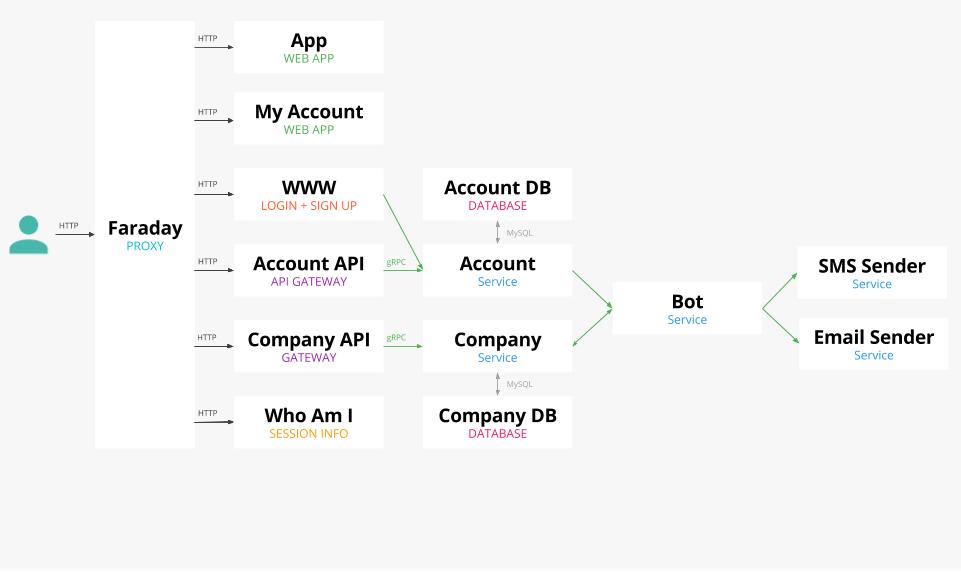 We use a monorepo that stores all of our code in this single repo. We use Vagrant to run a kubernetes cluster locally on your laptop. This makes it easy to run all of Staffjoy's services.

Setting up your Gopath

If you are running Go code, you should set up your $GOPATH, then clone this repository into the v2.staffjoy.com package:

Unison syncs files between the host and the VM in a way that preserves simlinks.

Unfortunately, installing it on OSX is a bit of a pain because the version and the compiler must be the same as the one in Vagrant!

First, install OCaml version 3.12 - you may need to say "yes" to some command prompts:

Then, compile unison with this version of ocaml. You may be prompted for your password.

Run make dev. Code will boot and run at staffjoy-v2.local. Note that the first time you do this could take up to 45 minutes in order to provision the VM!

Changes will trigger an automatic rebuild and redeployment. (Check deployment progress at kubernetes.staffjoy-v2.local/ui/). End the dev server with control + c (and it will automatically shut off the VM).

If you run into issues with stuck deployments in development - then run make dev-k8s-fix then re-run make dev.

To build code and run it locally, in vagrant go to the code directory $STAFFJOY in vagrant, then run make dev-build for a one-time build.

If you are loading assets like templates, CSS, JS, etc - you need to package the the data into the binary. Otherwise, the app will ship and it won't be able to find the assets!

To do this, use the go-bindata project. If you modify any of the asset files, you will need to rebuild them then commit the resulting bindata.go file and commit it. You have been warned!

Most services provide a build.sh file that compiles all the data that needs to be committed.

The tool GoConvey is great for seeing tests.

If you modify the files in protobuf/, run make protobuf to recompile all of the generated files.

⚠️ Please make sure that the version of protobuf matches the runtime version (see this issue):

If you're getting started with protocol buffers, here are some resources: