An integration test framework for practically anything. 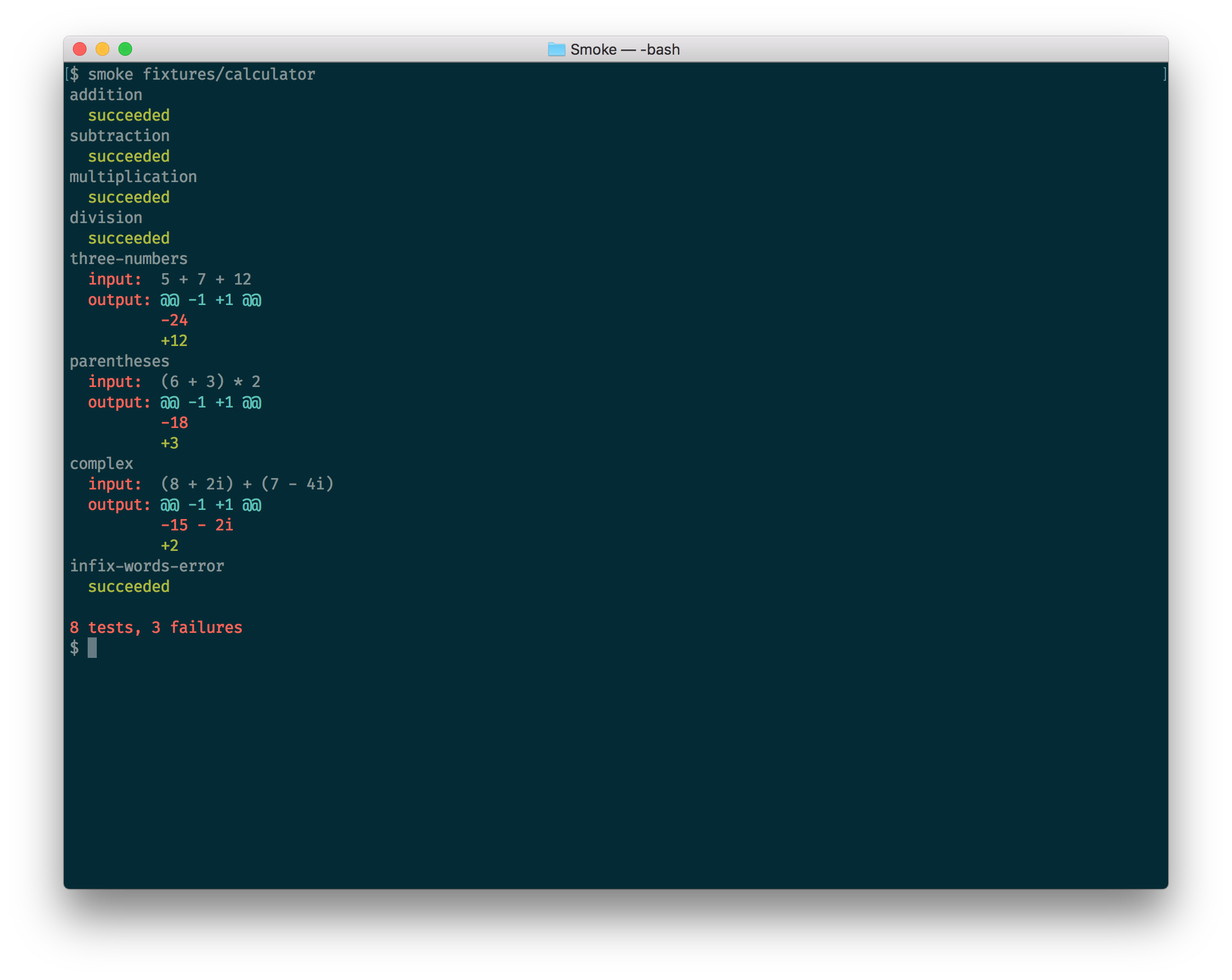 Smoke is designed to test anything that can be wrapped with a command-line interface. In practice, this amounts to almost any application or large piece of code. Whatever you're working on, no matter how big or complicated, you can usually wrap a CLI around it with minimum effort.

Smoke works especially well for testing large applications, especially after the fact. It allows you to create regression tests, golden master tests, and other things that make refactoring a legacy application much easier.

It's not a replacement for other, smaller tests. We recommend writing unit tests (perhaps even first), especially for new code.

You can download the latest release from the Releases page.

You can also build it yourself, using either Nix or Stack.

Smoke is distributed under the MIT license.

A test case consists of input and expected output. It's made with a YAML file.

First off, you need to specify the command itself. The command is the program to be run (and any common arguments). It is executed from the current working directory. The command can be overriden for each individual test case too.

Outputs that can be observed by Smoke consist of standard output, standard error and the exit status of the program. These are captured by running the program, then compared to the expected values specified. Any difference results in a test failure.

At least one of standard output and standard error must be specified, though it can be empty. If no exit status is specified, it will be assumed to be 0.

Our simplest calculator test case looks like this. It's a specification file named smoke.yaml (the file basename is a convention; you can name it anything you want ending in .yaml).

We use the YAML operator | to capture the following indented block as a string. This allows us to easily check for multiline output, and includes the trailing newline, which is useful when dealing with software that typically prints a newline at the end of execution. It also guarantees that we parse the value as a string, and not, for example, as a number, as in the case above.

We might want to assert that certain things fail. For example, postfix notation should fail because the second token is expected to be an operator. In this example, our calculator is expected to produce a semi-reasonable error message and exit with a status of 2 to signify a parsing error.

Sometimes the response might be one of a few different values, in which case, we can specify an array of possible outcomes:

We don't always want to check the full output; sometimes checking that it contains a given substring is more useful. We can use the contains: operator to specify this:

Note that we don't use | here, as we don't want to capture the trailing newline, which would make this test fail. Instead we use quotes around the value to ensure that the YAML parser treats it as a string, not a number.

You can also use equals: to explicitly specify that we're checking equality, though this is the default.

We can use files to specify the STDIN, STDOUT or STDERR values:

Using files gives us one big advantage over specifying the content inline: if the tests fail, but the actual output looks correct, we can "bless" the new STDOUT or STDERR with the --bless flag. This means you don't have to spend time copying and pasting, and can instead just approve the results automatically.

We can ignore tests (temporarily, we hope) by adding ignored: true.

And, of course, you can combine all these techniques together.

Smoke can also test that your application wrote a file.

For example, if we wanted to test that our implementation of the cp (copy) command worked, we could write the following:

You also need to create a file called input.file, containing whatever you want.

This test will run cp input.file output.file. In doing so, it will set the working directory to the same directory as the smoke.yaml file (so you can run the tests from anywhere, and they'll behave exactly the same). It will then revert the entire contents of the specified directory, ., to its state before the test was run.

As with STDOUT and STDERR, you can also use --bless to automatically accept the new output if it changes.

Take a look at the files fixture for more examples.

Running with a shell

Sometimes writing a small program for testing purposes is a bit distracting or over the top. We can specify a string as the contents of a command, which will be passed to the default shell (sh on Unix, cmd on Windows).

You can override the shell, too, both per test, or at the top-level, by providing a shell: section. For example, we could use this to pass the -e flag to bash, making sure it fails fast:

You could even set your shell to python or ruby (or your favorite scripting language) to allow you to embed scripts of any kind in your Smoke specification.

Sometimes, things aren't quite so deterministic. When some of the output (or input) is meaningless, or if there's just too much, you can specify filters to transform the data.

httpbin.org provides a simple set of HTTP endpoints that repeat what you tell them to. When I GET https://httpbin.org/get?foo=bar, the response body looks like this:

Unfortunately, because of the "origin", this isn't very testable, as that might as well be random data. Given that I only really care about the "args" property, I can use jq to just extract that part:

Now my test passes every time.

You can also specify the filter as an inline script by using a string rather than an array. It will be run with sh -c. We prefer the array structure, as it's more portable.

There are more examples in the processing-filters fixture.

If you're looking for more examples, take a look in the fixtures directory.

In order to run tests against an application, you simply invoke Smoke with the directory containing the tests. Given the tests in the test directory, we would run the tests as follows:

Tests can also be passed on an individual basis:

To override the command, or to specify it on the command line instead of the command property, you can use the --command option:

Bear in mind that Smoke simply splits the argument to the --command option by whitespace, so quoting, escaping, etc. will not work. For anything complicated, use a file instead.

Smoke will exit with a code of 0 if all tests succeed, or non-zero if any test fails, or if the invocation of Smoke itself was not understood (for example, if no test locations are provided).

Output will be in color if outputting to a terminal. You can force color output on or off with the --color and --no-color switches.

Enjoy. Any feedback is welcome.

We had a problem at work. It was a pretty nice problem to have. We were getting too many job applicants and we needed to screen them quickly. So we put some tests online and pointed the candidates at 'em.

We quickly found we had another problem: it was taking a lot of developer time to decide whether we should bring in the furballs for real-life interviews. So one night, while more than a little tipsy, I wrote Smoke.

We let our interview candidates write code in whatever they like: Java, C#, Python, Ruby… I needed a test framework that could handle any language under the sun. At first, I thought about ways to crowbar RSpec into running tests for applications in any and all languages. This was a stupid idea. Eventually I decided the only thing every language has in common is the command line: every language can pretty easily support standard input and output (with the obvious exception of Java, which makes everything difficult).

I have to stress that this is not a replacement for looking over people's code. I've invited people for further interview even when failed every one of my test cases, because they understood the problem and mostly solved it. Similarly, someone that passes every case but writes Python like people wrote C in the 80s makes me very sad, despite all the green output from Smoke.

Developers of Smoke pledge to follow the Contributor Covenant.

You will need to set up Nix as above, and enter a Nix shell with nix-shell, or use lorri with direnv.

We dog-food. Smoke is tested using itself.

Before committing, these commands should be run, and any failures should be fixed:

(You can typically just run make reformat check to trigger them all.)

Some development tools, such as ormolu, don't work on Windows, so we encourage you to develop on a Nix-compatible environment. However, if you need to write or test some code on Windows, you can always read the Makefile to figure out what commands to run.

Smoke should work on Linux and macOS without any issue. Almost all features should also work on Windows, with the exception of allowing scripts as commands. This is due to a (quite reasonable) limitation of Windows; you can't make text files executable.

Get A Weekly Email With Trending Projects For These Topics
No Spam. Unsubscribe easily at any time.
haskell (1,534)
testing-tools (188)