This repository hosts the code underlying Geocomputation with R, a book by Robin Lovelace, Jakub Nowosad, and Jannes Muenchow. If you find the contents useful, please cite it as follows:

The first version of the book has been published by CRC Press in the R Series and can be viewed online at bookdown.org. Read the latest version at geocompr.robinlovelace.net.

Note: we are actively working on the Second Edition

Since commencing work on the Second Edition in September 2021 much has changed, including:

See https://github.com/Robinlovelace/geocompr/compare/1.9main for a continuously updated summary of the changes to date. At the time of writing (April 2022) there have been more than 10k lines of code/prose added, lots of refactoring!

Contributions at this stage are very welcome.

We encourage contributions on any part of the book, including:

See our-style.md for the books style.

During the project we aim to contribute upstream to the packages that make geocomputation with R possible. This impact is recorded in our-impact.csv.

To ease reproducibility, we created the geocompkg package. Installing it from GitHub will install all the R packages needed build the book (you will need a computer with necessary system dependencies and the remotes package installed):

Running the commands above should install the packages needed to run the first part of the book (chapters 1 to 8). To install and build the book in its entirety, run the following command (which installs additional Suggests packages, this may take some time to run!):

You need a recent version of the GDAL, GEOS, PROJ and udunits libraries installed for this to work on Mac and Linux. See the sf packages README for information on that.

Once the dependencies have been installed you should be able to build and view a local version the book with:

For many people the quickest way to get started with Geocomputation with R is in your web browser via Binder. To see an interactive RStudio Server instance click on the following button, which will open mybinder.org with an R installation that has all the dependencies needed to reproduce the book:

You can also have a play with the repo in RStudio Cloud by clicking on this link (requires log-in):

Geocomputation with R in a Docker container

To ease reproducibility we have made Docker images available, at geocompr/geocompr on DockerHub. These images allow you to explore Geocomputation with R in a virtual machine that has up-to-date dependencies.

After you have installed docker and set-it up on your computer you can start RStudio Server without a password (see the Rocker project for info on how to add a password and other security steps for public-facing servers):

If it worked you should be able to open-up RStudio server by opening a browser and navigating to http://localhost:8787/ resulting in an up-to-date version of R and RStudio running in a container. 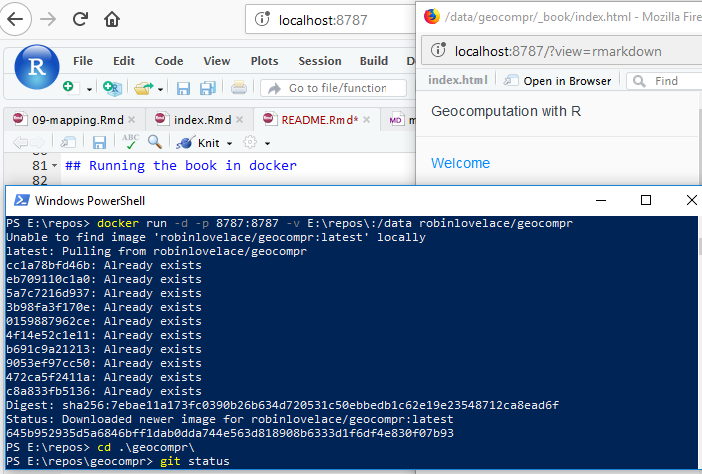 If you see something like this after following the steps above, congratulations: it worked! See github.com/rocker-org for more info.

If you want to call QGIS from R, you can use the qgis tag, by running the following command for example (which also shows how to set a password and use a different port on localhost):

From this point to build the book you can open projects in the geocompr directory from the project box in the top-right hand corner, and knit index.Rmd with the little knit button above the the RStudio script panel (Ctl+Shift+B should do the same job).

See the geocompr/docker repo for details, including how to share volumes between your computer and the Docker image, for using geographic R packages on your own data and for information on available tags.

To reduce the books dependencies, scripts to be run infrequently to generate input for the book are run on creation of this README.

The additional packages required for this can be installed as follows:

With these additional dependencies installed, you should be able to run the following scripts, which create content for the book, that weve removed from the main book build to reduce package dependencies and the books build time:

Note: the .Rproj file is configured to build a website not a single page. To reproduce this README use the following command:

To cite packages used in this book we use code from Efficient R Programming:

This generates .bib and .csv files containing the packages. The current of packages used can be read-in as follows:

If you would like to add to the references, please use Zotero, join the open group add your citation to the open geocompr library.

We use the following citation key format:

This can be set from inside Zotero desktop with the Better Bibtex plugin installed (see github.com/retorquere/zotero-better-bibtex) by selecting the following menu options (with the shortcut Alt+E followed by N), and as illustrated in the figure below:

Zotero settings: these are useful if you want to add references.

We use Zotero because it is a powerful open source reference manager that integrates well with the citr package. As described in the GitHub repo Robinlovelace/rmarkdown-citr-demo.