The reason this package exists is to give you peace of mind when providing a RESTful API. Instead of chasing down preventable bugs and saying sorry to consumers, you can focus on more important things in life. 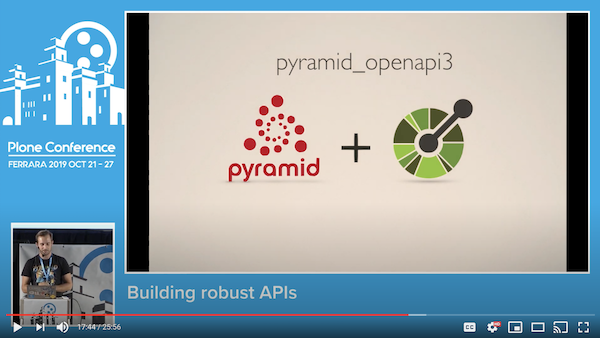 For requests, request.openapi_validated is available with two fields: parameters and body. For responses, if the payload does not match the API document, an exception is raised.

A feature introduced in OpenAPI3 is the ability to use $ref links to external files (https://github.com/OAI/OpenAPI-Specification/blob/master/versions/3.0.0.md#referenceObject).

To use this, you must ensure that you have all of your spec files in a given directory (ensure that you do not have any code in this directory as all the files in it are exposed as static files), then replace the pyramid_openapi3_spec call that you did in Getting Started with the following:

Provided with pyramid_openapi3 are a few validation features:

These features are enabled as a default, but you can disable them if you need to:

Warning: Disabling request validation will result in request.openapi_validated no longer being available to use.

There are three examples provided with this package:

Both examples come with tests that exhibit pyramid_openapi's error handling and validation capabilities.

A fully built-out app, with 100% test coverage, providing a RealWorld.io API is available at niteoweb/pyramid-realworld-example-app. It is a Heroku-deployable Pyramid app that provides an API for a Medium.com-like social app. You are encouraged to use it as a scaffold for your next project.

These packages tackle the same problem-space:

We do our best to follow the rules below.

Use in the wild

A couple of projects that use pyramid_openapi3 in production:

Get A Weekly Email With Trending Projects For These Topics
No Spam. Unsubscribe easily at any time.
python (50,967)
openapi3 (79)
pyramid (24)