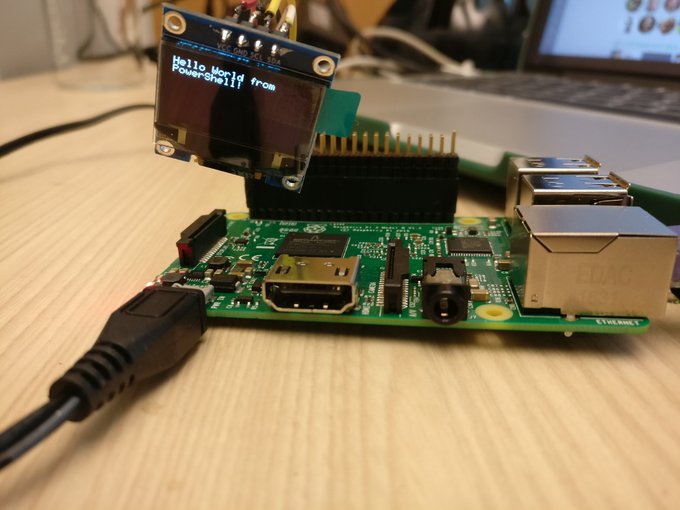 The main goal of this project is to provide a friendly interface for interacting with hardware sensors and devices using PowerShell.

That said, it was built as close to the metal as possible to keep the library broad enough to cover a range of sensors and devices.

The hope is that this module will be the foundation for other modules that will expose specific cmdlets for interacting with specific sensors and devices.

For example, a cmdlet stack to turn on a light bulb might be:

To see some examples of modules built on top of PowerShell IoT, see the Examples folder.

Please see our docs folder here for an API reference, pin layout and other docs. For examples, checkout our examples folder.

This project relies on .NET Core IoT Libraries. It is a .NET library for interacting with Raspberry Pi's IO functionality.

You can grab the latest version of PowerShell IoT by running:

Please note that since this module works with Hardware, higher privileges are required (run PowerShell with sudo, or as root user)

If you want to write a module that uses PowerShell IoT, include it in the RequiredModules field of your module manifest.

You can also manually download the zipped up module from the releases.

NOTE: You can't build on ARM devices at this time so you will need to build on another machine and copy the build to the device.

At this point, you'll notice an out folder has been generated in the root of your repo. The project is ready to be deployed to your device.

We have included a helper script, Move-PSIoTBuild.ps1, that will move the PowerShell IoT build over to your device. This copy uses PSRP over SSH so make sure you're able to connect to your pi this way. The Microsoft.PowerShell.IoT module will be copied to your $env:PSModulePath on your device. Here's an example:

You can also easily copy examples in the Examples folder over using the -WithExample flag. Just give a list of examples you want to copy over and it will move those to you $env:PSModulePath along with Microsoft.PowerShell.IoT:

Also, with the -Build parameter, it will build/test/package your project before moving it.

NOTE: If you'd rather not use the script, simply copy the out/Microsoft.PowerShell.IoT to your device to get started.

If you have the Microsoft.PowerShell.IoT module in your PSModulePath:

At this point you can now mess with the module:

You can run tests, but they require a particular setup. Here is how you run them:

We currently have a build agent that will deploy PR code onto a test Raspberry Pi and run the tests found in the test directory.