This repository contains the source code for the NoesisGUI Unreal integration.

This is just a short guide on how to install and build the plugin from the source code on this repository. For your convenience, you can download a ready to use version of the plugin directly from our website. If you do so, you can skip the installation instructions and jump directly to our First steps with NoesisGUI and Unreal.

Please, use our forums and tracker to submit bugs and feature requests. 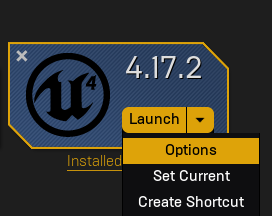 If all the steps so far have been successful, your Unreal Engine install should contain the following directories. Please note that only the directories relevant to the NoesisGUI plugin are listed here, and that your installation may contain additional files and directories that have been omitted here for clarity.

After you read this document, we have a few samples so you can see some of the concepts in action: