DRY Ansible for Network Automation (DANA) is a collection of Ansible roles and playbooks that allow you to provision, sketch and backup a network running Junos OS, without the need of manually feeding extra data to represent the physical topology.

This is achieved by leveraging a topology inspection role that automatically discovers every link and interface that connect all the devices of particular Ansible group.

The primary goal of this project is to assist network (and DevOps) engineers who need to deploy a testing network quickly, reliably and with as few manual inputs as possible.

Another intent is to illustrate some practical examples of how the Junos OS Automation stack can be integrated with open source building blocks such as Ansible, Python and Jinja2;

Don't Repeat Yourself (DRY) is the core paradigm driving this project:

Suppose you spent few hours in the lab cabling up the following network topology for testing purposes. 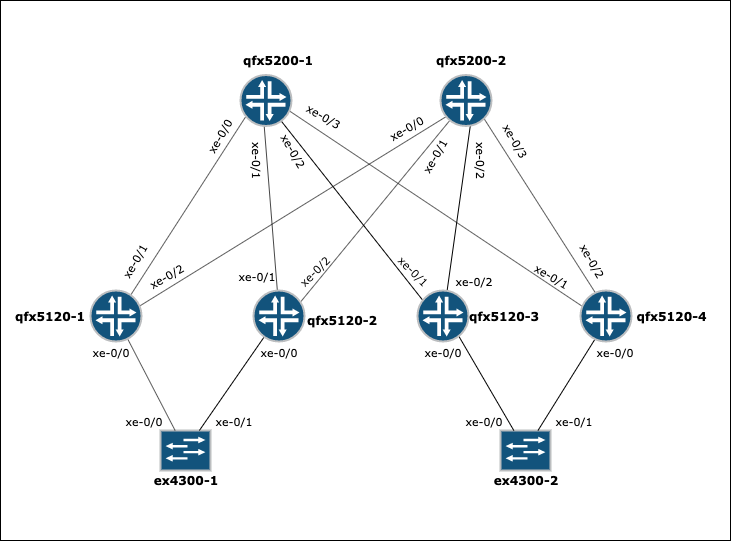 The switches only got your Lab default configuration, which includes management and loopback interfaces.

Your ultimate goal is to configure an IP Fabric:

The playbook pb_provision_ebgp_underlay is what you need:

The tag push_config tells the playbook to both generate and commit the configuration to the remote devices. You can omit this tag if you only want to generate the files locally. They will be stored in a folder _ebgp_underlay_config in your inventory directory. 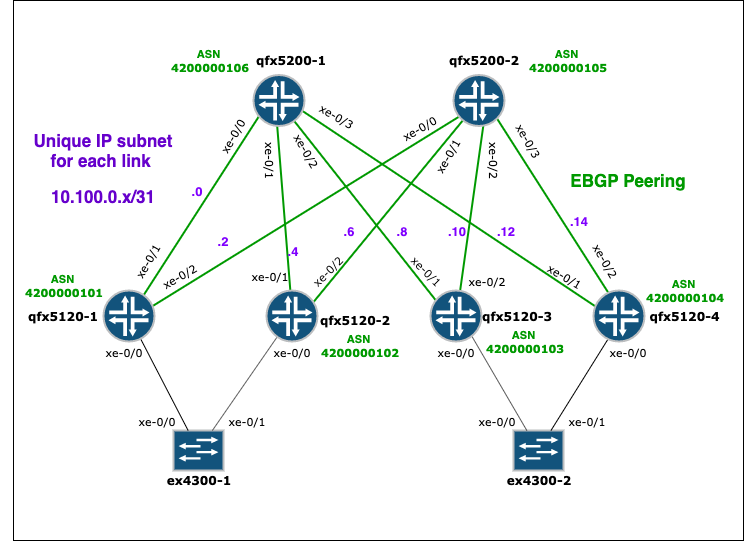 A quick summary of what just happened:

You can find out more about how the discovery is carried out and how you can tune the default variables to suite your needs in the Usage section of the documentation below.

The leaf device qfx5120-1 in this example will be provisioned with the following configuration:

On the machine that you want to use as Ansible controller (can be your laptop or a dedicated server/VM):

At this point you are ready to execute the playbooks.

Each individual operation is defined as a custom Ansible role. Roles are then imported across different ready-to-use playbooks.

You can use this project in two ways:

You can check each individual playbook documentation for more details and examples: