BTW: Someone has a notebook with CX_DB8 working for those who don't want to go through the installation or deal with version mismatches due to me no longer updating this repo. It's available here

A contextual, queryable, token (or sentence or paragraph) extracting summarizer designed from the ground up by a former debater for debaters

Sorry, but right now I don't have a good configuration setting abstraction - so you need to edit the source code to change settings. Don't worry, it's not hard First, open up cx_db8_flair.py in your favorite text editor

Change line 32 to "True" if you'd like to see "Dynamic" highlights of your embeddings (brightness changes based on "importance"), False is like the bottom examples picture.

Edit lines 36-45 as you see fit to choose the embeddings. Comment out the embeddings you don't want (comment with the # sign) and uncomment the embeddings that you do want to use. Stuff closer to the top should be faster to run but worse at summarization (in general). You can mix and match any combination of embeddings (even your own finetuned embeddings). Personally, I've had a lot of success with "Law2Vec", a word2vec instance trained on a high quality legal corpus. Turns out lawyers are amazing at Summarizing debate evidence!

If you are using word level summarization, the integer which controlls the word window size is on line 303. I will soon update this to be a user configurable value.

For a list of supported embeddings, look for the tables here and here from Flair.

Upon first running cx_db8_flair.py, CX_DB8 will prompt you with a screen asking you to continue. Press "y" or it will end execution, and save any summaries found to "test_sum.docx".

If you'd like to run CX_DB8 on a file on disk, you can pass a "card_file_path" to it like so

If a file is not passed, CX_DB8 will then prompt you to add card text into CX_DB8 when Ctrl-D (Ctrl-Z + Enter for Windows) is pressed.

Then it will ask for a card tag, or allow the user to give a "generic" summary by entering -1.

It will ask you what percentile that you want underlined and highlighted. this is user dependent based on the size of the summary.

It will then prompty for a card author and date, and then the citation. This is only relavent for the creation of the word document. After all of this are entered, the summary is generated and the prompt will ask you to either continue execution with a "y" or to end exeuction.

Depending on the paramaters chosen, summarization may take a long time (more accurate) or be nearly instant.

Please submit issues for help with installation or running cx_db8 here with the issue tracker. 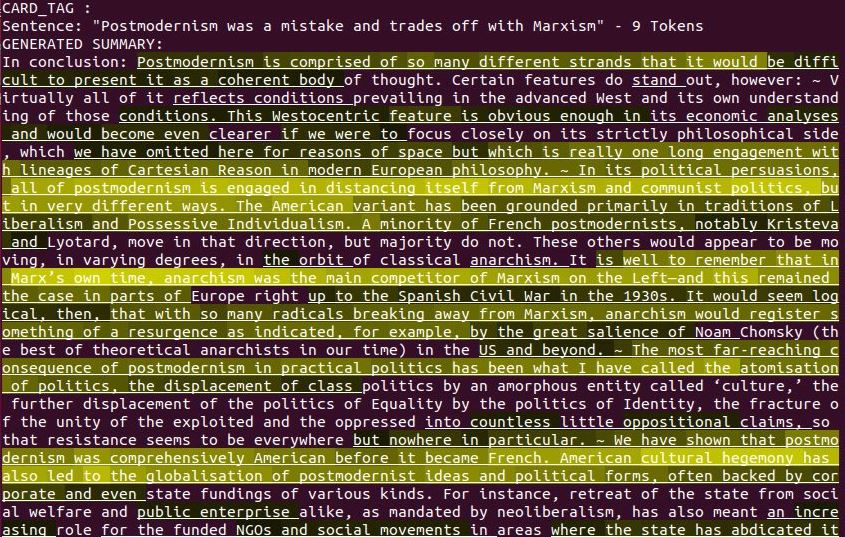 Card tag given: "Humanity is an abstraction". 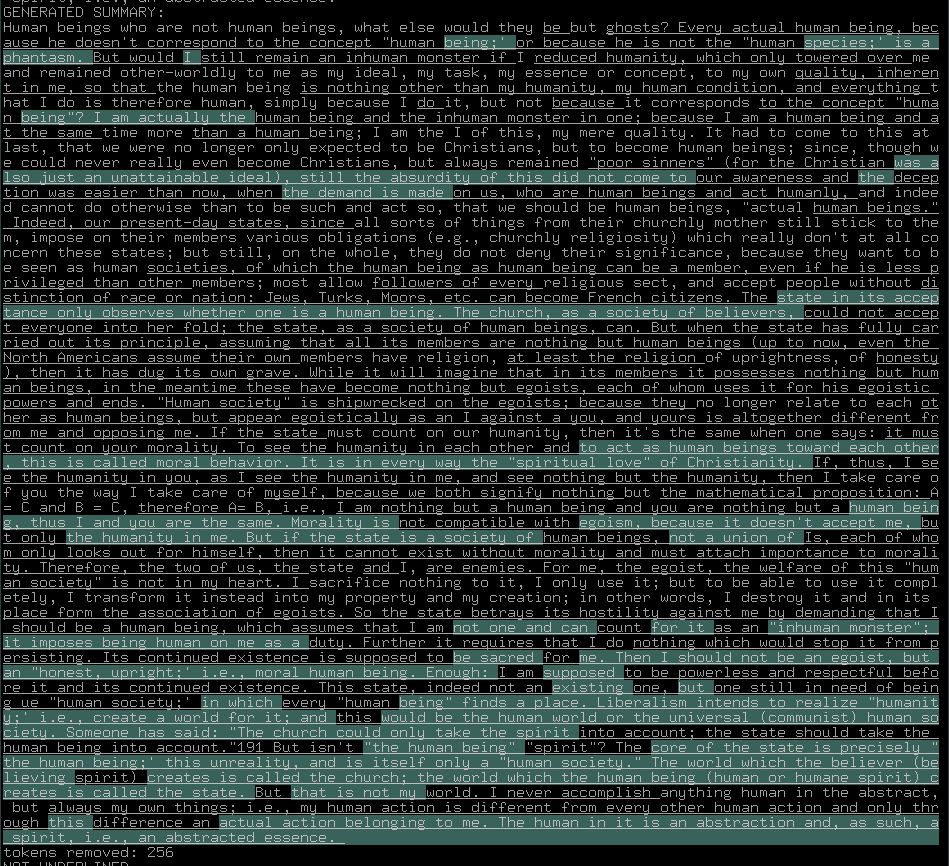 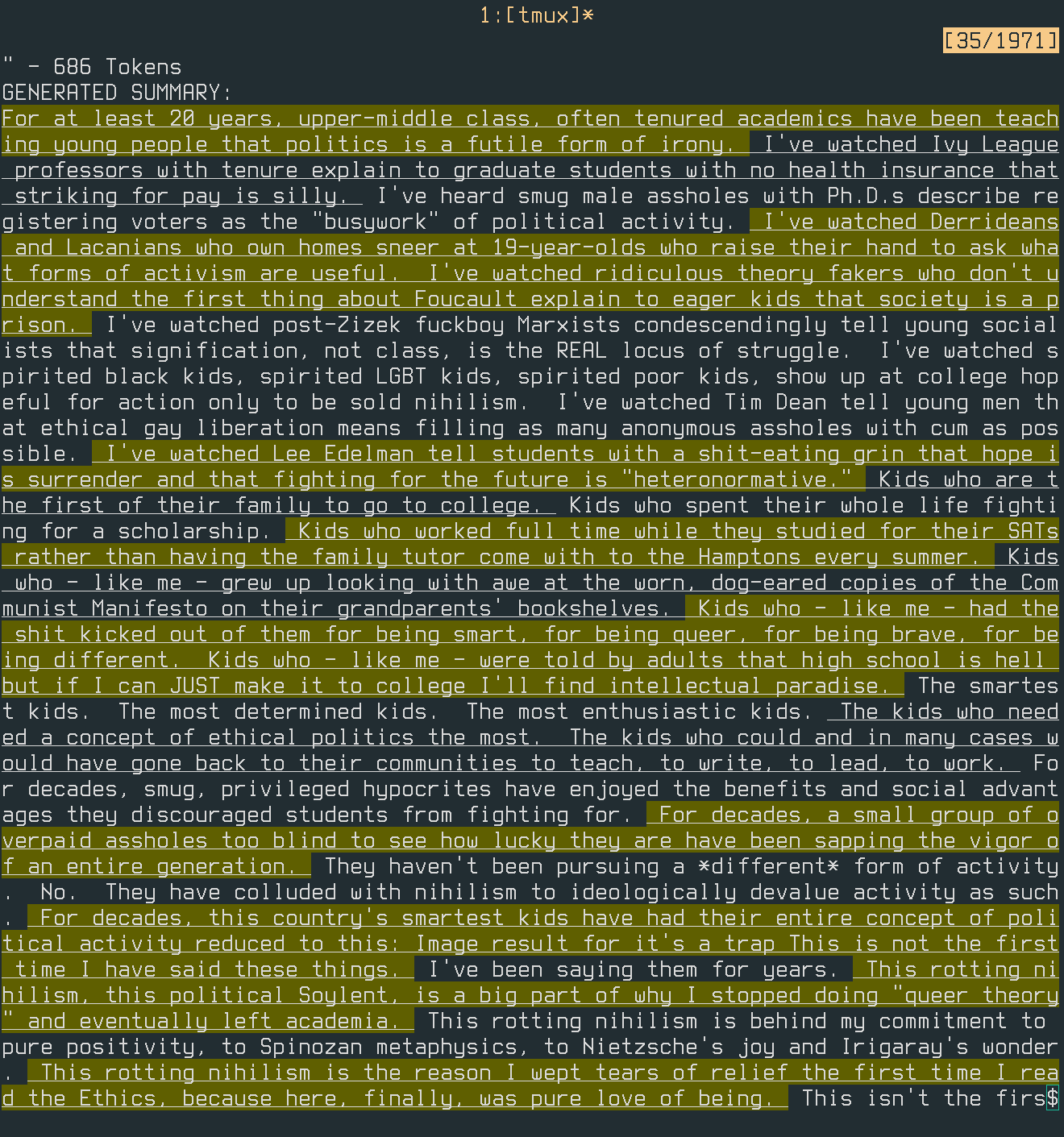 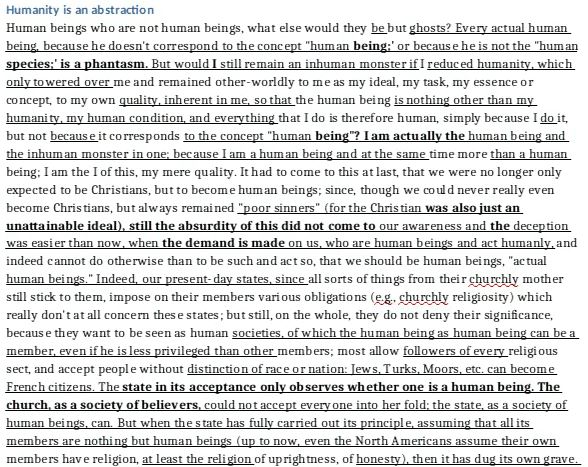 I finally got fed up with trying to experiment with supervised summarization systems. Thanks to the magical folks at Google for creating the unsupervised "Universal Sentence Encoder" which is more rightly called the "Universal Text Encoder" given how smoothly it works on Words, Sentences, or even whole Documents.

Also, high school debators are really quite bad at properly summarizing debate documents. Garbage in - Garbage out when it came to Supervised Learning methods.

So, I enlist the help of the wikipedia pre-trained Universal Sentence Encoder to create the (to my knowledge) worlds first contextual token-level extractive summarizer.

It works by first computing the "meaning" of the card tag, which can be anything. Then, it goes through every word in the actual card. Now, here, I could just compute the meaning of the individual word like "The" = 0.11 and "Person" = 0.12, but that doesn't include the context of the other words around it.

So, instead I take N words before and after the string, and use those to compute the meaning of the N gram generated for each word. The first word only includes N words after the first word, and the last word only includes N words before the first word. This allows the CX_DB8 system to properly compute the meaning of each word in the text in the context of the N words before and after it. I then compute a similarity score between each word with context and the card tag, and decide to include it in the summarized text if the similarity score is over a user defined threshhold. If the user gives a 1, then the summarizer only includes the exact same string, if the user gives a 0 it includes everything. I've experimented and found a score of about 0.25 - 0.4 to be very effective

I am strapped for time but will provide a good setup and install script and instructions on how to install and use this. If you know how to code, you should be able to easily get this working on your own system. it doesn't even require a GPU, since the Universal Sentence Encoder model is CPU friendly (but you might need Mac or Linux - have not tested Windows support yet and that's a big deal since no one runs word on a Linux box)

So - I'm really passionate about someone using the various different new cool innovations that currently exist in NLP to solve a surprisngly well defined problems that (should) have been solved by now: Token-Level Extractive Summarization.

In American competative cross-examination debate (also known as Policy Debate) - a unique form of evidence summarization is utilized - Summarization by highlighting - which this "card" will illustrate: 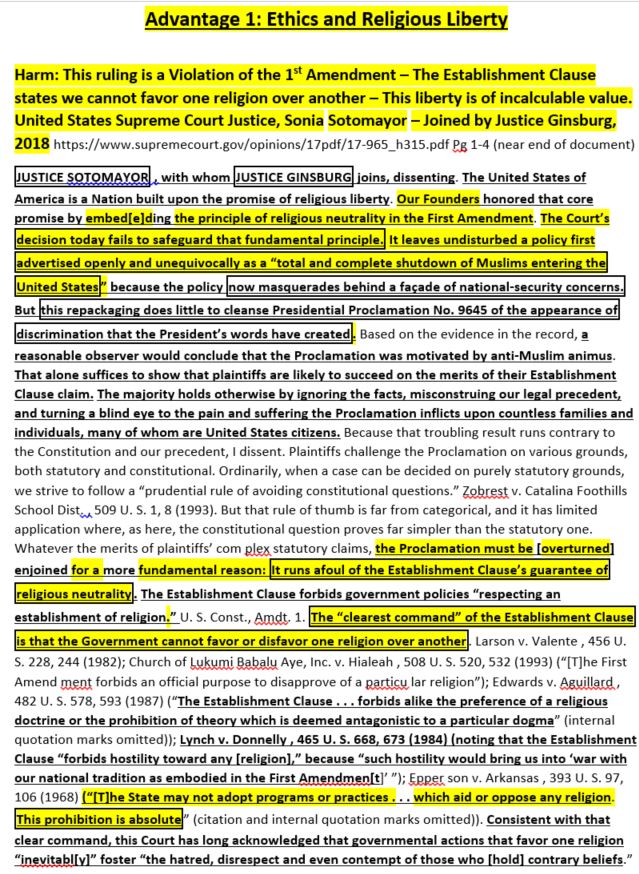 In this example, everything after the citation is the verbatim supreme court dissenting opinion. Competative debators summarize this document by simply underlining the important parts of the document. They read outloud the highlighed portions of the document.

There are a multitude of NLP tasks that we could apply to a dataset of thousands of pieces of debate evidence. I am most interested in the task of creating an automatic evidence underlining tool.

CX_DB8 is above, but this repo also contains some misc code for analyzing debate corpuses

I'm publishing the dataset parsing and creation tools now to prove that I am (to my knowledge) the first one to write a parsing script capable of converting competative debate evidence into CoNNEL 2003 / Seq2Seq friendly data types. In theory, any Seq2Seq or PoS tagging model that accepts one of those formats can utilize this dataset. I will write a quick tutorial on how to gather these dataset files yourself:

*Step 1: Download all open evidence files from 2013-2017 ( https://openev.debatecoaches.org/ ) and unzip them into a directory

*Step 2: Convert all evidence from docx files to html5 files using pandoc with this command:

*Step 3: run one of my .py files with python3 to have it parse all the html5 files and it will dump out a file titled "card_data.txt" in the output format specified by the .py file

I will document how to change the file locations at a future time.

What are your plans?

So, it looks like the prefered framework for doing state of the art NLP work Flair is finally being updated to allow it to train with large datasets. This is going to allow me to create a sentence compression (highlighter) model as soon as the patch allowing large datasets makes it into Flair. I will be training this model using the latest in sentence and word pre-trained embeddings (like google BERT) to give the sentence compression model far more semantic understanding.

After the sentence compression model is developed (DONE), I have 2 other models I want to create for the good of the debate community.

Combing the 3 models, a document highlighter, a document classifier, and a card tag generator with a system to automate taking in new cards (RSS feed or something involving Kafka / REST Apis) - a fully end to end researching system can be created - which will automate away all tasks of debate.