Making proper use of Touchbar inside Xcode. 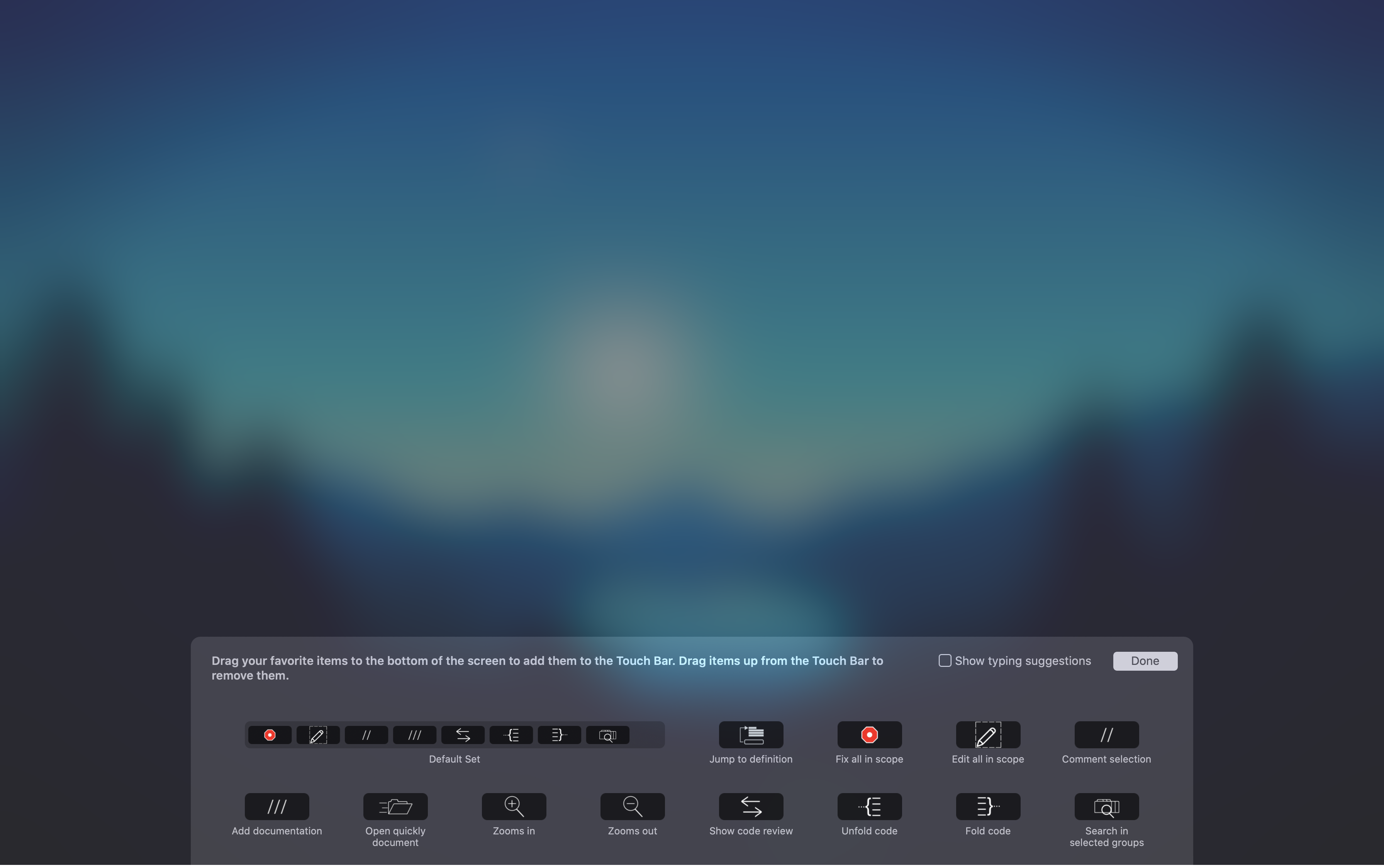 You can see it in action in here

How to install this

If you don't wana bother with downloading the code and change the app to your needs, go to release section in this repo (one above the bar with programming language used) and download the binary :)

How to use this

Disclaimer: This tool uses the default shortcuts, if you customized some of your shortcuts, you can customize this easily to your desires.

Before everything, if you are using any other keyboard than the one with American-US layout, add this keyboard as secondary inside you keyboard options

Go to: Settings -> Keyboard -> Input Sources -> click on plus and ADD American international - PC. After you added this keyboard you should be able to use this app.

The reason why this is needed is that I was only able to get the US keyboard layout (qwerty) GOLDEN STANDART KEY ADDRESSES (Look at Key.swift) from where I call the shortcut. Look down at TL;DR section if you wanna learn more.

Just run the application and... Let it work for you. For the first time you might need to enable something in accessibility to let this app press the keys. I won't tell you to enable it, but I recommend you to do so :D But it's up to you now. This application has build in system which observes which application is currently on foreground and according to it, it sets the touchbar application on foreground. So whenever you need some shortcut which you don't remember, this touchbar tool is there for you :) Also if you don't like it and rather use the native debug touchbar screen, you can always dismiss it. Whenever you come back to the application, it will pop right back to be presented again. If you don't find any of the given shortcut on the list, feel free to add it inside Shortcut+Instances.swift

How to add shortcut

Basically keylogger which wil blow up your macbook, call shortcuts on fly and help you more with your workflow :)

There goes my special thanks to JK_Kross who at that time wasn't employed as iOS Dev but music teacher and did a great job by helping me with this project :)

Guys at MTMR from which I took inspiration, but not the code :)

Megg on Instagram for providing me some icons for some actions. :)

This would be great honor to me because I never tought it is possible to make some return at least at money for the time I spend on some tool.

If you want to support this project, feel free to send some coffee money to this link

If you don't want to spend money, you can still support me if you will share this tool with your colleagues and tell them how nice it is and how it improved your workflow. I personally love to use the documentation button :D:D

Oh yeah and, take a look at guys at Showmax, they are doing really cool stuff in a great way :)

How this project works.

The first thing to do is to class-dump private Touchbar API from AppKit I really would love to know what DFR Prefix means, but let's put that aside :D After we got this API, we can do pretty much what we want with the touchbar. We can replace the whole touchbar screen, or just the part we are supposed to, replace the control buttons, add Nyan cat etc. You can read more inside TouchBarPresenter, TouchBarPrivateAPI.h and AppDelegate.

Okay, so now we have control of touchbar, what we need now is to create some of our view. At first I had some nice approaches in mind, the first one was to use da native approach with multiple NSTouchBarItems and refresh the items every time there is some change in UI. Don't get me wrong, this approach is good. But I don't like it. I have seen MTMR (Project that inspired me to do this) and I tought I want to do this the other way. Basically the function presentSystemModal(touchBar:position:identifier) is called there every single milisecond because there is always something going on. I don't believe in this approach so I decided that we should probably use some view on it. After that we decided to be hipsters af and create SwiftUI View on the touchbar which contains the buttons to call our desired actions. However this would cause issues on drag'n'drop touchbar Items. So we went to classic native solution.

The main problem in this project is handling of shortcuts / quick actions / menu actions. There came 3 ideas into my mind: