This tool was made for educational purposes only. I urge anyone who would use this tool to only use it on targets he/she is authorized to access as a remote control tool. I hold no responsibility if one used it for any unlawful activity.

Arbitrium is a cross-platform remote access trojan (RAT), Fully UnDetectable (FUD), It allows you to control Android, Windows and Linux and doesn't require any firewall exceptions or port forwarding. It gives access to the local networks, you can use the targets as a HTTP proxy and access Router, discover local IPs and scan their ports. Includes modules like Mimikatz, new modules can easily be added. In addition, if Arbitrium is used with a DNS spoofing software is can spread autonomously between devices (#AutoSpread). Arbitrium is a multiple parts project, the parts were built using Java, JS, C, Python, Cordova and VueJS. 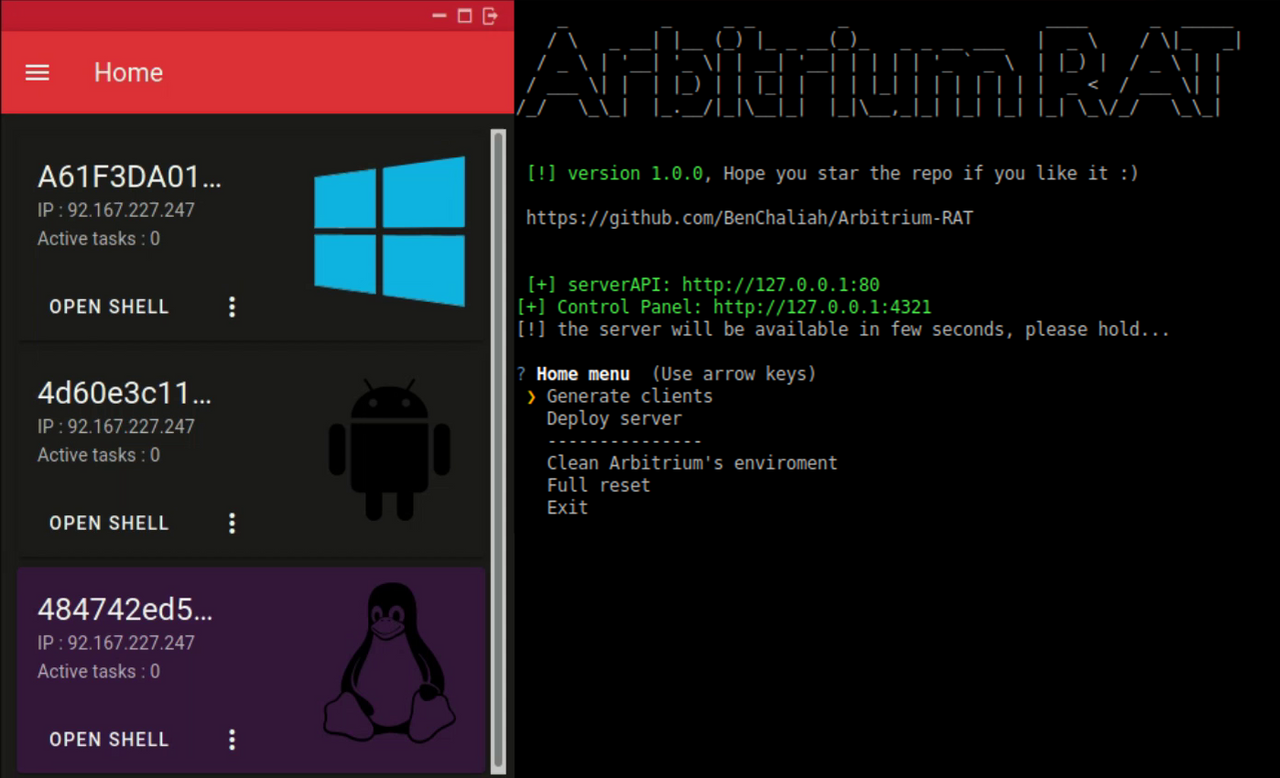 With few clicks the CLI will generate an undetectable ready-to-use client.

Arbitrium doesn't require adding an exception to the firewall, or a port forwarding rule. The server is an API with endpoints that receives tasks for a specific target and others that the trojan periodically request to get the new instructions, the instructions can be a JavaScript file (the Android app is made using Cordova) or a Shell file to run in the terminal/CMD. Once the server receives a task for a device, the former schedule the task then it opens a child process where it waits for the trojan's response by listening to a dedicated ephemeral port. Therefore, the trojan doesn't need to listen to any port.

Unlike with Stock Android, customizations like MIUI by Xiaomi, EMUI by Huawei or Samsung's Android Pie ignore the permissions/exceptions given to an app by the user. So if you try to run an Android's trojan in the background, the moment the app start running frequent or heavy (in some cases even lightweight) tasks (ex: sending http requests periodically) it will be killed no matter what permissions the user grants, ths OS completely ignores the current settings, dontkillmyapp.com is an known website dedicated for this particular issue.

The aforementioned issue was quite annoying while working on this project, after awhile I found that building a lightweight binary that keeps running the assigned tasks in the background while the MainActivity stand still just after launching the binary apears to bypass most the restrictions and actually even improve the performance of the App.

MainActivity receives a JS file from the server and uses ThreadPoolExecutor to initiate the binary without hanging for it to exit (More on this StealthMode/BatteryBypass).

There is also a control panel, it's not a requirement but an extension, it's a simple VueJS webapp, a UI you can use to control the targets instead of directely sending requests to the API. The webapp is available here: Arbitrium WebApp

⚠️ use setAPI_FQDN.sh first to set the server domain/IP in all files

The binaries inside /libs are stripped, so it recommended to use these if you're not debuging.

⚠️ The binaries built for Android should be put inside /assets (rename them to binary_{cpuabi}) and the APK will download them, but if you wish to put them inside the APK just make sure to extract them inside the App data folder /data/data/package_name or create a symbolic link inside it window.MyOrangePlugin.exec("/system/bin/ln -s ...

⚠️ The response of the API may differ depending on the platform of the device from which the trojan operate. the following part explores mainly the case of Android, because it's the most sophisticated due to the OS's restrictions.

When the client sends its first request to the endpoint /checkupdate.js, the server create a genShell's object, which sets a unique local port for that device self.lport = self.setPort() and a thread id self.threaduid = random.randint in addition to other attributes. Then returns the appropriate JavaScript code (depending on the CPU/ABI) that will contain instructions to download, chmod and execute (main thread, or poolexec) some resources. As for the following requests it returns a JS code that will execute the pending tasks if there are any.

Example: Let say you want to use the target as a HTTP proxy, the API formulate the request as the following cmd:

then save it into assets/runsh_{uid_task}.sh, then depending whether the request came from StealthMode/BatteryBypass or not, /checkupdate.js gets the trojan to download the shell file and run it.

Using the appropriate token the admin can get a device to run a command via this endpoint, the server will describe this command as pending which will impact the next response of /checkupdate.js to that device. Then it'll return a random generated id for this task.

The combination of the task id generated by /addtask and the aforementioned thread id threaduid makes the name of the file inside /threads where the output of the command is saved. Once this endpoint is requested it checks whether /threads/{threaduid}x{taskid} exists, if so the server returns the content of the file otherwise it return 0.

This will run reverse_http.py in a separate screen, then returns a IP:PORT (HTTP proxy), that will allow the admin to pivote HTTP requests through the trojan device. For instance, if the Admin sets these info in the browser settings and try to open router port (Ex: http://192.16...), the browser will open the router web interface as if the admin was a part the target LAN.