Types-First UI is an opinionated framework for building long-lived, maintainable UI codebases. It uses TypeScript and the power of its type system to guarantee the completeness and correctness of a Redux backend that can be connected to React components in a performant way. It places the focus on first defining your system in terms of the data and types that will drive it, then filling in the blanks. This project is inspired heavily by re-frame.

Who is this for?

Well, first and foremost, it's for us at Avero. This library represents the codification and enforcement of what we have established as our best practices for building interfaces. However, we believe that there is significant value in this approach and that it is worth sharing.

Hopefully, there are others who can use and benefit from this work directly. But even if not, we think it is valuable to share our approach and give visibility into how one group of engineers chooses to approach some of the hard problems of building maintainable UI codebases.

More generally, this project might be for you if you believe...

Redux is an event dispatching system that operates on a single global state atom that is only modifiable via actions. It makes little sense to begin building your application before defining two interfaces: the shape of your state and the shape of all actions that operate on that state. From there we can leverage the strict unidirectional flow of Redux in our type system.

You should be familiar with the basic terminology of Redux (Actions, Reducers, Action Creators, Stores, Middleware) and RxJS (Observables, Epics) before reading further. The documentation for Redux and Epics are excellent, so we'd strongly encourage reading it.

This project aims to facilitate this "types-first" style of application design while providing utilities focused around maximizing type safety and maintaining interop with existing Redux libraries.

If you dislike types "getting in your way" or think of them as secondary to your application, then this is not the framework for you. At Avero we believe in starting with your API first, which in this case is the interfaces of your application.

If you do not care about the long-term maintainability of your codebase, such as writing a todo app or a school project, this may be overkill for you. This framework is designed and optimized for building large, production UI projects that will have a long lifespan and many contributors.

You will occasionally run into cryptic error messages (e.g. key inference on Paths) due to relying heavily on type inference. Deep lookup types + mapped types + conditional types + inference makes the compiler work pretty hard... which leads to the next point.

VS Code is a bit sluggish with this right now. You will not receive the instant 10ms feedback you may be used to, so there is a tradeoff here. Hopefully this will improve as the compiler matures around these newer type features. When I tried Webstorm it was not giving me the same level of inference as VS Code (Types-First UI requires TS 2.9+). 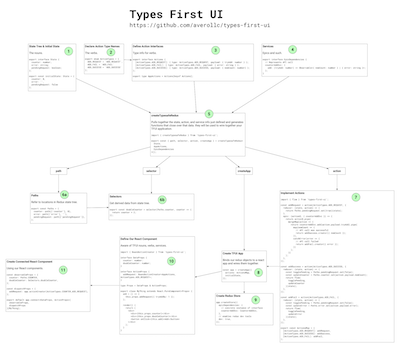 Let's create a Redux counter application with Types-First UI. We will include basic pending/error handling and a mock API call to show slightly more complexity than the normal counter app.

The first thing we want to do is define the interfaces of our application. The entire UI depends on state and action interfaces, so it makes sense to start with them first. Additionally, most maintenance work involves adding or modifying actions, so keeping them in one place is helpful for maintainability. Any changes to these interfaces should propagate down to the rest of the system. When we talk about "unidirectional" types, we are referring to these two interfaces driving downstream functions and utilities.

Our Redux application has little knowledge of the outside world. Its focus is around actions and how those actions affect the state atom. We use Epics as a primitive for side effects, but the logic of those side effects should live behind "Services", which generically encapsulate any API that returns an observable. This is helpful for testing and separation of concerns.

Now we can use these interfaces to drive our typesafe "utility" functions. These are the functions you will use to build your Redux application. Any changes to the interfaces described above will be immediately reflected in these function signatures.

Additionally, Paths include utility get, set, & unset functions that will be used in your reducers.

This is the primary focus of the developer when creating Redux applications. Given a set of actions and a state tree, we now need to implement the concrete instances of these actions. This may include reducers, epics, both, or neither. The return type of action is an ActionImplementation. The exported ActionsMap represents an exhaustive collection of implementations for each action type that we defined in our initial interfaces. It will be passed into our createApp function below.

With our concrete instances, we can now create our app instance. This is used to bridge React and Redux--the app exposes a connect function that mirrors the Redux variation, except with support for our path and selector primitives. We use an explicit import of the app rather than a Provider component using React's context API.

A selector is an observable representing some directly derivable value from your state atom. Selectors can be recursively combined to create other selectors. These are conceptually similar to ngrx selectors, as well as reselect.

Selectors are closed over an observable of the state tree, and include a number of performance optimizations to guarantee that they will be shared, they will not leak subscriptions, they will emit at most once per change to the state tree, and they will only evaluate their projector function when their input values change. Selectors may optionally provide a comparator function to determine when new values should be emitted, for further performance optimizations. This is useful for selectors that return values which are not referentially equal (i.e. mapping over an array).

A path is a selector with special properties and constraints. Paths represent observables of some subtree of your state atom. A path is constructed by providing the literal path to a subtree of your state interface. It is an observable that will emit whenever the focused piece of the state tree has changed (i.e. it is no longer referentially equal to its previous value). Paths are the primitive from which we compute other derived values, through selectors. For every subtree of your state tree, there should be a corresponding Paths object.

Because paths are bound directly to a piece of the state tree, they also include typesafe, non-mutating get, set, and unset functions which are used in our reducers.

This interface represents the "implementation" of a single action described in the system. It is the return type of the action function provided the framework. This provides strict type safety around your Redux primitives, as well as providing a useful grouping of tightly related code. The community has referred to this pattern as the ducks pattern. Action implementations are where we combine our typesafe utilities into meaningful business logic that will drive the functionality of our application.

Actions are implemented using the action utility function. When implementing an action you may provide a reducer or an epic for that action; you must exhaustively implement every action defined in your action types before you will be able to create an app instance.

Types-First UI is built on top of redux-observable. We use epics as the primitive for managing asynchrony and side-effects within our system.

In general, epics meet the contract of actions in, actions out. For a full exploration of the concept, you should refer to the redux observable guide. However, we also provide a set of more constrained, specific epic definitions: single-action epics, middleware.

Single-action epics are provided as part of an action implementation. They are scoped to the specific action being implemented, and only have access to the stream of all actions emitted from the system as the third parameter. As a user, this means you do not have to use the ofType() operator within your action epics to narrow the action stream. This also guarantees that action implementations do not bleed concerns. Although most single action epics won't care about the allActions stream, it is useful for use cases such as cancellation.

Not to be confused with Redux middleware, this represents a particular type of "Epic"--one that never returns new actions. This is a good place to put "side effects" in your application (logging, tracing, setting context/storage, persistence, etc).

For example, we could have:

App is the atomic unit of functionality in Types-First UI. Apps are recursively composable, which is cool...but scary and complicated. So I'm going to wait to document this feature.