SWT (Standard Widget Toolkit) is a very robust GUI toolkit that is most famous for building the Eclipse IDE, a free and open-source general language Integrated Development Environment that was the first to provide a high-performance pause-free Java IDE (unlike earlier versions of NetBeans and other Java IDEs), thanks to its very smart software architecture. Additionally, Eclipse RCP (Rich Client Platform, built on top of SWT) has been used by NASA to build Mars Rover operational software. So, Eclipse technologies are not only very highly proven, but are also considered some of the best in the world. In fact, it took CSS decades before it finally caught up with one of SWT's very effective ideas, the GridLayout. Glimmer DSL for SWT makes Eclipse Technologies available in Ruby via JRuby. 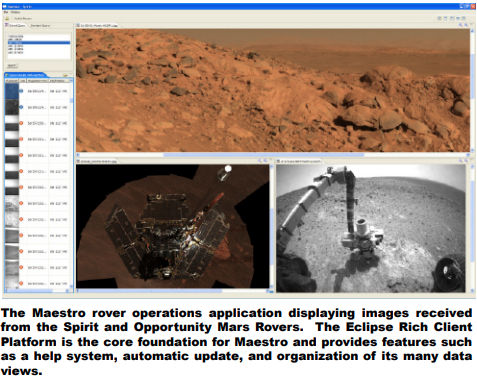 Glimmer DSL for SWT 4.21.2.5 includes SWT 4.21, which was released on September 6, 2021. Gem version numbers are in sync with the SWT library versions. The first two digits represent the SWT version number. The last two digits represent the minor and patch versions of Glimmer DSL for SWT. Note that SWT now supports AARCH64 on Mac and Linux, but it is not fully tested in Glimmer DSL for SWT yet, so deem its support experimental for the time being without guarantees for functionality until declared otherwise (please report any issues you may encounter).

Starting in version 4.20.0.0, Glimmer DSL for SWT comes with the new Shine syntax for highly intuitive and visually expressive View/Model Attribute Mapping, relying on <=> for bidirectional (two-way) data-binding and <= for unidirectional (one-way) data-binding, providing an alternative to the bind keyword.

Please help make Glimmer DSL for SWT better by providing feedback and contributing whenever possible. Any feature suggestions that are accepted could be implemented within weeks if not days. 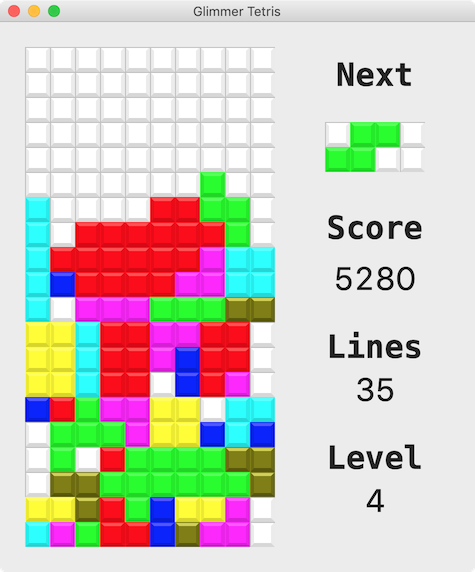 Are We There Yet? - Small Project Tracking App 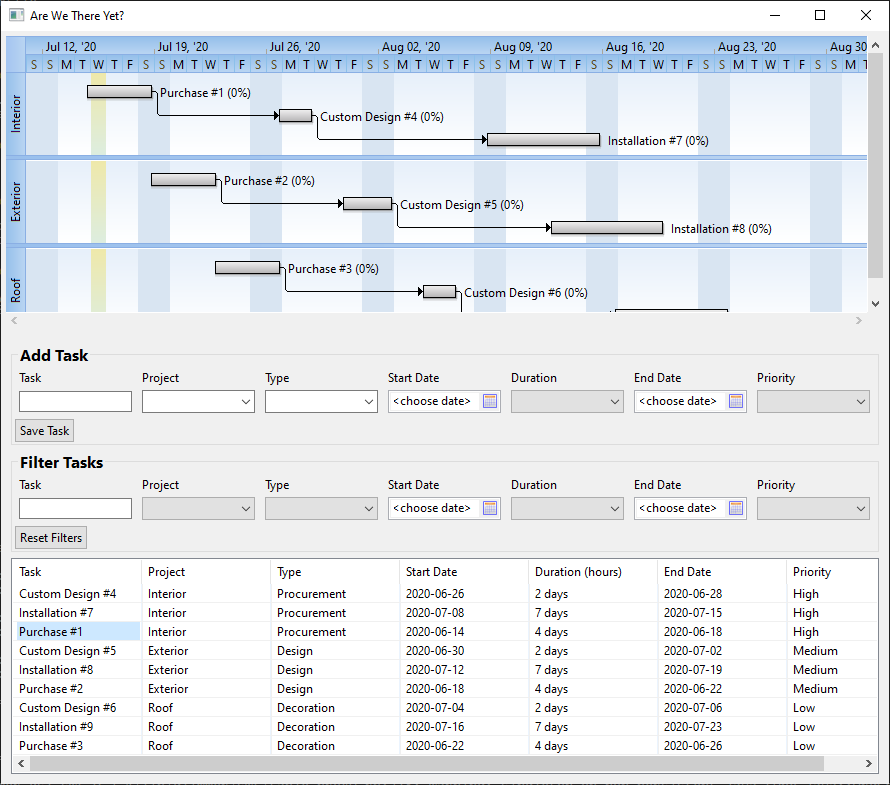 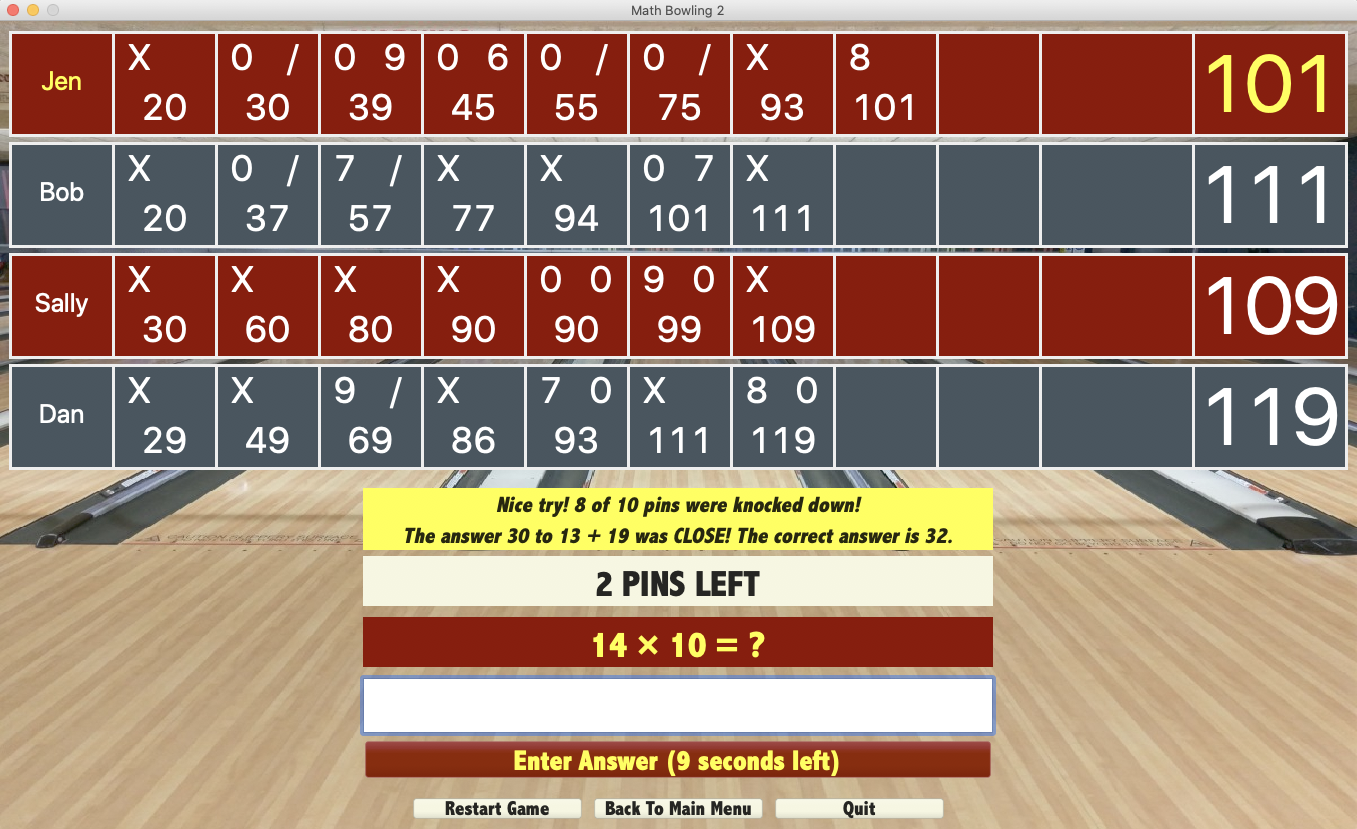 Ruby is a dynamically-typed object-oriented language, which provides great productivity gains due to its powerful expressive syntax and dynamic nature. While it is proven by the Ruby on Rails framework for web development, it currently lacks a robust platform-independent framework for building desktop applications. Given that Java libraries can now be utilized in Ruby code through JRuby, Eclipse technologies, such as SWT, JFace, and RCP can help fill the gap of desktop application development with Ruby.

There are several requirements for building enterprise-level/consumer-level desktop GUI applications:

Glimmer provides cross-platform support that does not require Ruby compilation (like Tk does), thanks to JRuby, a JVM (Java Virtual Machine) faster OS-threaded version of Ruby.

Glimmer leverages SWT (Standard Widget Toolkit), which provides cross-platform widgets that automatically use the native GUI libraries under each operating system, such as Win32 on Windows, Cocoa on Mac, and GTK on Linux.

Furthermore, what is special about SWT regarding "High Performance" is that it does all the GUI painting natively outside of Java, thus producing GUI that runs at maximum performance even in Ruby. As such, you do not need to worry about Ruby dynamic typing getting in the way of GUI performance. It has ZERO effect on it and since SWT supports making asynchronous calls for GUI rendering, you could avoid blocking the GUI completely with any computations happening in Ruby no matter how complex, thus never affecting the responsiveness of GUI of applications while taking full advantage of the productivity benefits of Ruby dynamic typing.

Extensibility has never been simpler in desktop GUI application development than with Glimmer, which provides the ability to support any new custom keywords through custom widgets and custom shells (windows). Basically, you map a keyword by declaring a view class matching its name by convention with a GUI body that simply consists of reusable Glimmer GUI syntax. They can be passive views or smart views with additional logic. This provides the ultimate realization of Object Oriented Programming and micro-level MVC pattern.

Thanks to Java and JRuby, Glimmer apps can be packaged as cross-platform JAR files (with JRuby Warbler) and native executables (with Java Packager) as Mac APP/DMG/PACKAGE or Windows EXE/MSI.

The Java Virtual Machine already supports OS-native threads, so Glimmer apps can have multiple things running in parallel with no problem.

SWT supports Canvas graphics drawing, and Glimmer takes that further by provding a Canvas Shape/Transform/Animation DSL, making it very simple to decorate any existing widgets or add new widgets with a completely custom look and feel if needed for branding purposes.

Startup time is long. Thankfully, there are work-arounds that could make apps start as fast as instantly.

Contributors who appreciate Glimmer's ultra-high productivity, maintainability, and extensibility might want to help report and resolve remaining challenges in its software architecture.

Glimmer runs on the following platforms:

Glimmer's GUI has the native look and feel of each operating system it runs on since it uses SWT behind the scenes, which leverages the following native libraries:

More info about the SWT GUI on various platforms can be found on the Eclipse WIKI and SWT FAQ:

Glimmer might still work on other versions of Java, JRuby and SWT, but there are no guarantees, so it is best to stick to the pre-requisites outlined above.

To change the SWT version to a custom swt.jar version that you have, simply set the 'SWT_JAR_FILE_PATH' env var.

Please follow these instructions to make the glimmer command available on your system via the glimmer-dsl-swt gem.

If you intend to learn the basics of Glimmer but are not ready to build a Glimmer app yet, pick Option 1 (Direct Install).

If you intend to build a Glimmer app from scratch with scaffolding, pick Option 1 (Direct Install) as well.

Otherwise, Option 2 (Bundler) can be followed in rare cases where you want to build an app without scaffolding.

Note: if you encounter any issues, please report and then install a previous version instead from the list of Glimmer Releases (keep looking back till you find one that works). Do not be disheartened as nearly everything is only a few days of work away. That said, keep in mind that this project is free and open source, meaning provided as is, so do not expect anything, but if you help with reporting and contributing, you could speed things up or even become part of the project.

Run this command to install directly:

Or this command if you want a specific version:

Afterwards, you can use glimmer and girb commands.

On the Mac, you also have to run:

If you are new to Glimmer and would like to continue learning the basics, you may continue to the Glimmer Command section.

Otherwise, if you are ready to build a Glimmer app, you can jump to the Glimmer Scaffolding section next.

Note: if you're using activerecord or activesupport, keep in mind that Glimmer unhooks ActiveSupport::Dependencies as it does not rely on it.

(Use for Manual App Creation)

Add the following to Gemfile:

Note: if you're using activerecord or activesupport, keep in mind that Glimmer unhooks ActiveSupport::Dependencies as it does not rely on it.

You can use girb as an alternative to irb when prototyping Glimmer DSL for SWT GUI DSL code.

Here is a listing of supported widgets taken from the SWT website:

In a nutshell, the Glimmer GUI DSL syntax consists mainly of:

Example of a keyword representing a table widget:

Example of a multi-line selection table widget with a table column as content that has a header text property as 'Name'.

If you need more widgets, you can check out the Nebula Project (50+ enterprise-grade custom widgets)

Glimmer configuration may be done via the Glimmer::Config module.

See a listing of samples including screenshots and explanations at:

Check the samples directory in glimmer-dsl-swt for examples on how to write Glimmer applications. To run a sample, make sure to install the glimmer-dsl-swt gem first and then run: 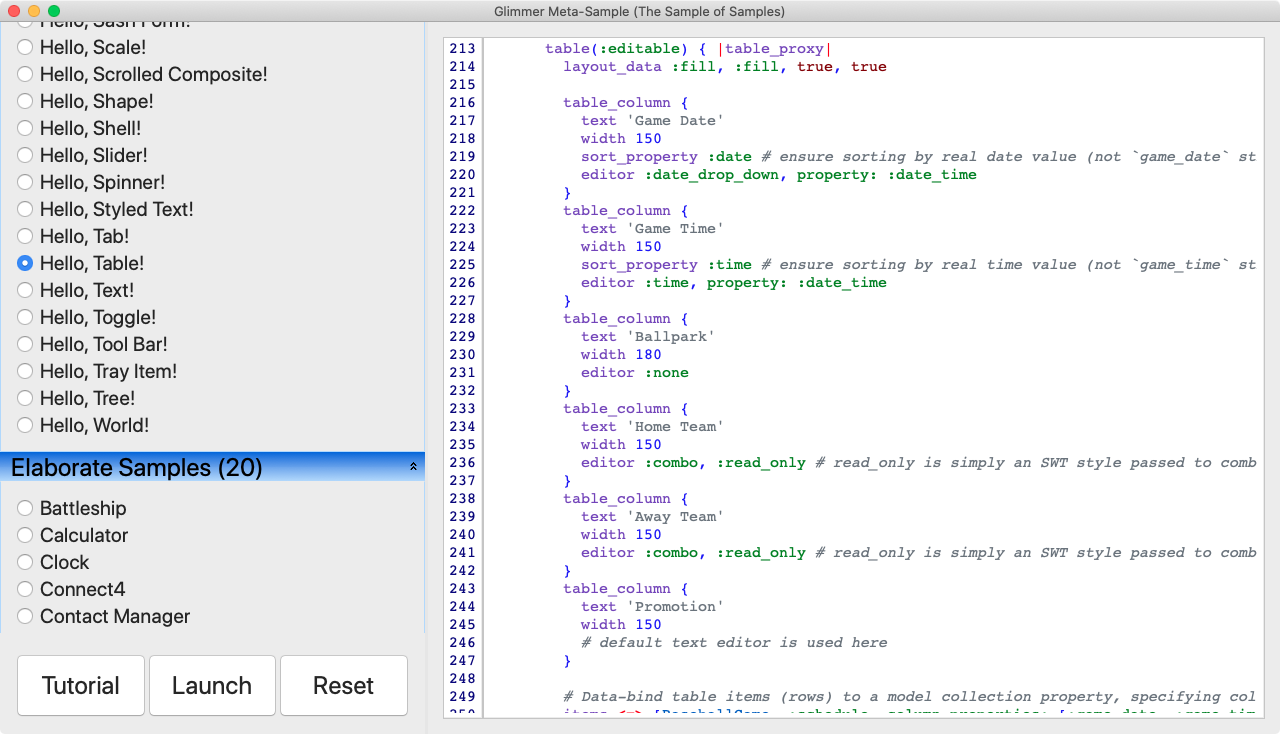 The following production apps have been built with Glimmer.

If you have a Glimmer app you would like referenced here, please mention in a Pull Request.

Are We There Yet?

Are We There Yet?: A tool that helps you learn when your small projects will finish

Glimmer simplifies the process of native-executable packaging and distribution on Mac and Windows via a single command:

Glimmer should have support for automatic (and manual) app updates via the Mac App Store on the Mac (not tested yet, so contributor help is appreciated). Getting on the App Store requires running the glimmer package command with the Mac App Store keys configured as per the Mac Application Distribution instructions.

Here is a list of notable 3rd party gems used by Glimmer:

Here is the SWT Javadoc API:

Here is a list of SWT style bits as used in widget declaration:

Here is an SWT Layout guide:

Here is an SWT Drag and Drop guide:

Here is an SWT Image guide:

You may submit issues on GitHub.

If you need live help, try to

These features have been suggested. You might see them in a future version of Glimmer. You are welcome to contribute more feature suggestions.

If you would like to contribute to Glimmer, please study up on Glimmer and SWT, run all Glimmer samples, and build a small sample app (perhaps from this TODO list) to add to glimmer-dsl-swt Hello or Elaborate samples via a Pull Request. Once done, contact me on Chat.

You may apply for contributing to any of these Glimmer DSL gems whether you prefer to focus on the desktop or web:

Glimmer logo was made by Freepik from www.flaticon.com